The renewed Teatro alla Scala in Milan celebrates its re-opening on December 7 th 2004, after 3 years of important restorations. A.E.I. is there.

The famous clock of La Scala, till then useless following to a damage caused by a lightening, is able to show the precise time again. The clock, placed above the stage at a height of 20/25 meters is able again to show the the precise time thanks to the initiative of A.E.I. & C.

The clock has been entirely taken apart and repaired by a special working group, the restoration has been made either to the fixed parts or the movement parts that have been taken apart and inspected one-one. Besides, a new automated system based on an electronic device has been installed. It activates either the hour-wheel or the minute-wheel, this last every fraction of 5, as it was originally before the damage.

Finally a system of programmable lighting, matching with the shows schedule, has been installed as well. After all, the famous La Scala in Milan has been a cultural seismograph for over 200 years, during which a non-stopping flow of famous orchestra leaders and great singers has passed, always assuring a sublime musical quality. And since, precision and quality have always been a must for A.E.I. & C., we have been proud of supporting what, probably, is the most famous opera house in the world. 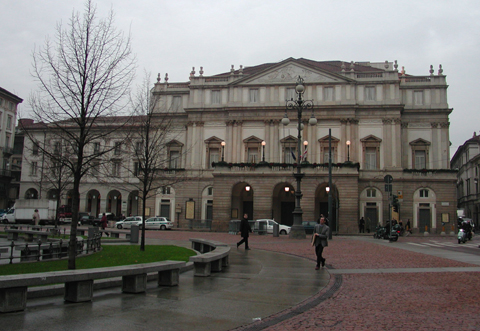