The founding of AEI Perego ideally dates from 1929 when Renzo Lorenzi, an engineer originally from Trento, founded Brevetti Lorenzi in Milan, the first Italian company to manufacture systems for automating bells. The systems produced by Brevetti Lorenzi, patented with respect to the needs and traditions of national and regional chimes, were personalized by Engineer Lorenzi and then constructed and installed by the company’s technicians. The company made use of its collaboration with the Fonderia Barigozzi for supplying the bells. In a short time, Brevetti Lorenzi won widespread acceptance, while its products went on to handle the concerts of many of the most important bell towers in Italy and throughout the world.

IT WAS THE BEGINNING OF A GREAT REVOLUTION in the field of handling and ringing bells. Electro-mechanical technology for automating bell systems is a successful alternative to traditional ringing through the use of bars or wheels manually activated using ropes. This technology initiated by BREVETTI LORENZI was quickly established and began the rapid diffusion of new systems THROUGHOUT ITALY.

Nevertheless, such systems were based on the logic of applying the necessary equipment (motors, and systems for control and braking, etc.) to the systems in use. So, the manual systems were “adapted” to electrification and automation, remaining substantially unchanged in their general mechanics and movement. It was the logic of using the minimum means to achieve the maximum benefit that allowed making the transformation at an acceptable cost. Then came the MOTORIZED BELL YOKE, the first and only substantial innovation. 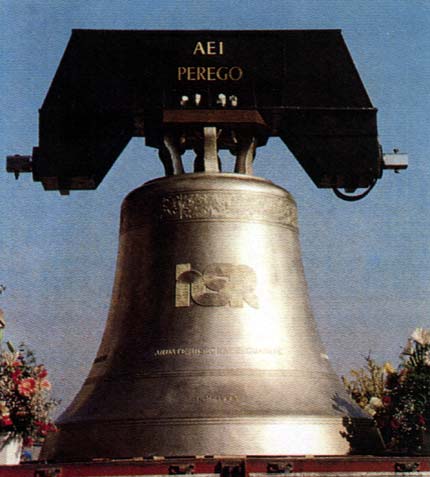 The AEI of Luigi Perego

Luigi Perego joined Brevetti Lorenzi’s technical department as a very young man and became an impassioned promoter and designer. In those years, Engineer Lorenzi, originally from Trento, was introducing systems for automating bells for the first time in Italy and patented with respect to the needs and traditions of national and regional chimes, which rapidly achieved the widest possible commercial success.

The systems were personalized by Engineer Lorenzi and then built and installed by the company’s technical personnel, who had their offices in Milan. Upon the death of Engineer Lorenzi and various other vicissitudes, the company was taken over by Luigi Perego. He had always maintained an active collaboration with Gianluigi Barigozzi, a bell founder by long family tradition, and knew how to make the company a leader capable of expanding the business to the production and sale of bells, in addition to the construction of frameworks to hold all the components necessary for the manual and motorized handling of the “sacred bronzes”.

Ever since he had taken over the company, Luigi Perego had dedicated himself to maintaining its leading position in the sector. Since the beginning of the Seventies, over 3,600 systems have been installed, including numerous bell concerts using high technology systems.

AEI Perego has received a great deal of recognition for its work, both in Italy and abroad (Switzerland, Spain, Israel, Australia, Japan, the Philippines, Taiwan and Thailand). In addition, it was the first company in Italy to apply these new systems to ancient instruments like bells, patenting clocks for programming their movements and thus the ringing of the bells and for the control of tower clocks. 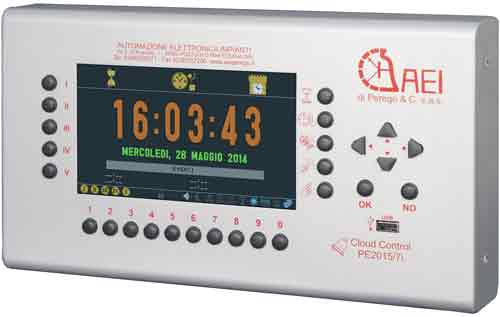 The “third generation” and the new digital age

In 2005 the direction of the firm is left to three new partners among which Luigi Perego’ son, Claudio.

The new generation of entrepreneurs sets as primary goal the client satisfaction, which means the reasearch of a business culture based on the “total quality”. A quality that, obviously, doesn’t exclude the continuous search of great levels of efficiency, to the purpose to minimize the productions costs and therefore the price for the client.

The continuous search of new technological solutions, other main point which the firm is based on, hands to the application of new digital technologies and nets to the sector of the bell plants. The use of nets, in this sector, represents an answer to the creation, by the Catholic church, of a new “organisational unity the so-called Pastoral Community”. Few priests must supervise different parishes of the “Community”, often situated in quite wide areas and have to be able to manage, as it concerns our sector, the schedule of the bells and the clocks of different churches. For this reason the most recent models of bells timers can be connected online and controlled in remote thanks to the use of suitable electronic cards. The net, so created, allows the priest to manage the different churches’ bells plants, using his own computer or his own mobile phone, easily from his office. In particularl, the remote control can be carried out using Internet or GSM technology.

The client’s central position in A.E.I. di Perego business culture and the constant commitment in the activity of research and development, allow the firm a further expansion in Italy and abroad; in 2008 A.E.I. di Perego was awarded the title of “Official Supplier of the Custody of The Holy Land” and all the bells plants of the Churches of Palestine and Israel, reporting to the “Custody of The Holy Land” have been committed to it.